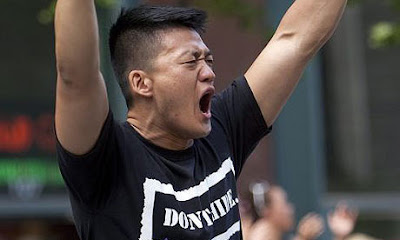 The fact that our congress finally consigned ‘don’t ask – don’t tell’ to the dustbin of history is not that big a big deal.

Don’t get me wrong: it’s historic, it’s moving, it vindicates everyone who fought for this decision, and it endorses our beliefs that our brothers and sisters serving in the military can ‘access their integrity’, to quote Lt. Dan Choi, who was booted last year after coming out on national television.

I’m not saying it’s not important, but I’m a little leery about congratulating ourselves for doing what should have been done not seventeen years ago, but 50 or 80 years ago. To be sure, the battle for acceptance of sexual minorities in our military was a significant stop on the path to acceptance. But it seems odd to celebrate something that should have been done anyway, even without the battle.

We had no international celebration when our medical institutions defeated smallpox last century. We did not hold festivals for giving the vote to people who should have had the vote all along. We have held no celebrations when women began to earn equity in the work place (of course, they are still not earning at the levels of their male counterparts).

In the long history of the fight for civil rights of LGBT people, this military issue was not exactly at the top of the stack. The concurrent fights for the right to adopt, the right to fair and equal treatment in the work place and in accommodations, domestic partner rights which allow partners of LGBT people to visit their loved ones in the hospital, the right to inherit the estate of a gay partner who has died, and of course, the big, big question: the right to marry - these issues loom like skyscrapers over the landscape of public policy.

While LGBT people can serve openly in the militaries of nearly two dozen countries, including Australia, Canada, Israel and Italy, gay people are still persecuted, injured, jailed, and executed in Uganda, Iran, Russia and other countries just for being who they are.

With a growing number of states in the US and countries around the world affirming the right to marry, gay marriage would have to be considered the biggest and most vital challenge in the fight for civil liberties. There is no issue more central, more vital, and more momentous that the right to legally choose who is allowed to marry whom. On that day, I will feel that the biggest hurdle to LGBT acceptance has been breached.

My comment about the repeal of ‘Don’t Ask…’ is more of a rhetorical flourish than a deep feeling. News of the US Senate’s vote on the question made tears well up in my eyes, and a deep and emotional feeling of vindication wash over me. We will take whatever victories we can, and fight for the ultimate right: to marry whomever we wish. The repeal of ‘Don’t Ask…’ may not be the biggest victory for Gay rights, but it is certainly big enough.

When every person has the right to live their life openly, with dignity and standing in their community, then I will celebrate like it was 1999.