It may seem at times that there is no good news coming from the Galapagos Islands. The issues facing this remote archipelago making up Ecuador’s smallest province read like an eco-nightmare; it seems like practically everything that happens here is a threat to the delicate balance of nature. Want to have a pet dog? It is likely illegal. Do you like raspberries? They are destroying great swaths of the islands. Do you think fishermen are humble, romantic heroes of the sea? In this part of the world they are a ferocious political force, and at the center of a bunch of controversies.

And the assaults on the environment are continuous. Here are the most recent headlines:

Summer 2006: reports received that one of the worlds rarest birds are now extinct on Fernandina Island, where they were first discovered a little over a decade ago. The estimated 100 remaining Mangrove Finches cling to existence on Isabela Island. 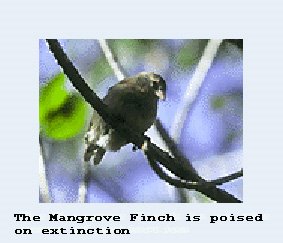 August 18, 2006: Ecuador’s largest newspaper “Hoy” announced that authorities had discovered not only invasive fresh water Tilapia on San Cristobal Island, but also a green iguana (believed to be from Central America) and astonishingly, a monkey! These animals do not exist naturally in the Galapagos and are believed to have escaped from tourist boats in the islands.

Sept. 21, 2006: emergency clean up of bunker oil on the shore of Santa Cruz Island. The spill is of unknown origin, but required the efforts of dozens of people to contain the spill and wash off iguanas, birds, and other animals.

Undated: The Charles Darwin Research station reports that “Alien Predators” are competing for the precious Galapagos tortoise habitat. According to the Darwin website, invasive donkeys and cattle trample and collapse nests, 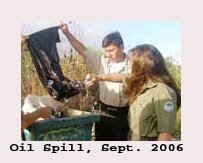 destroying the balance of soil humidity necessary for the successful incubation of tortoise eggs, pigs and dogs tear the nests apart and eat the eggs, black rats prey on the hatchlings as they emerge from the nest, and non-native fire ants are capable of killing the hatchlings and destroying the eggs as well. Oh, and don’t forget the goats and fire ants: they out-compete the tortoise for food and destroy the terrain, causing erosion.

This isn’t one or two species at risk, but an entire swath of animals on the brink of extinction.

Since 1997, the country has had seven presidents. The German based political watchdog group Transparency International ranks the Ecuadorian government among the most corrupt in the world.

In 2004, the current president Alfredo Palacio took office after violent and deadly demonstrations on the streets of Quito and Guyaquil demanding the resignation of the previous president, Lucio Gutierrez. 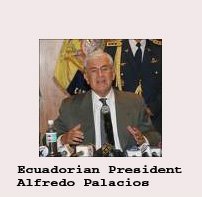 As of this writing, Ecuador's leftist candidate Rafael Correa has widened his lead over his rivals in the October 15 presidential election. Correa has gained 26 percentage points while center-left candidate Leon Roldos, Correa's closest rival, dropped one point to 18 percent.

The real political news is that one of the country's banana barons, and scion of Ecuador’s leading political family, Alvaro Noboa, trails in third place with 11 percent of support.

In just the last four years, there have been 12 directors of the Galapagos National Park (GNP). Back in 1996, Eliecer Cruz was named head of the Park. He was born in the islands and was widely seen as a rare director who really wanted to stand up to the powerful fisherman’s lobby and tourism industries. After prevailing in a number of dramatic confrontations with not only the fishermen, but also one old style judge in Puerto Ayora, even he was replaced.

In late 2004, leadership of the Darwin Foundation negotiated with the Ecuadorian government on the need for ‘solid, cohesive leadership’ within the Park Service organization.

By the end of September, then President Gutierrez removed park director Edwin Nuala – Cruz’ successor, a professional biologist and dedicated defender of the park - and replaced him with pro-fishing, pro-development and anti-conservation lobbyist Fausto Cepeda. Cepeda was replaced by Victor Carrion, after tumultuous negotiations with the Minister of the Environment. The current park director is biologist Raquel Molina, who is seen as generally supportive of nature-friendly policies, but with the turn-over in this position, it’s unclear what she can really do. La plus ça change…

There are at least a dozen endangered species of mammals and fish here. Over the past 10 years, fishermen have nearly depleted the populations of sea cucumber and shark: they earn huge sums on Asian markets.
Those two main economic interests, fishing and tourism, each have a representative in the nation's congress. Each blames the other for the ecological damage. "The problem isn't the fisherman," said Rogelio Guaycha, congressman from the province who also heads a local fishing cooperative. "What's killing the Galapagos is the tourism." Not surprisingly, tourist industry leaders say the same thing about the fishing industry, which is practically untouchable politically.
The future of the islands, which have been certified a World Heritage site by the United Nations, is by no means secure. It is against this background that a nascent news industry has been trying to find a foothold But how much power can the media in a sparsely populated province spread over 20 islands and thousands of square miles of ocean really have?

This was the overarching question facing network TV producer Cecilia Alvear as she coordinated the efforts of a handful of foundations and a spunky journalist group in the Galapagos. On August 25 and 26, Alvear and her two colleagues, NBC network correspondent George Lewis and me - I’m a journalism professor at Cal State LA and a radio reporter/talk show host - presented an intensive workshop designed to improve skills and increase contacts between journalists and public information officers working in the islands. 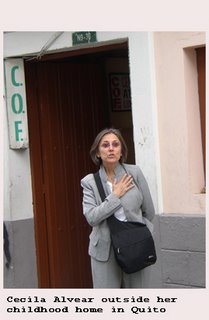 Enrique Ramos, editor of the ‘Colono’ newspaper published in Puerto Ayora on Santa Cruz Island (and an officer at the Charles Darwin Foundation center), helped organize but was unable to attend the workshop because he was under a deadline to get the paper out, said that workshops like this are vital to raise public interest and gain international attention to the island’s problems.

Alvear herself was born in the second largest Galapagos city of Puerto Baquerizo Moreno, and is the former president of the National Association of Hispanic Journalists (NAHJ) here in the U.S. Her commitment to the islands goes back many years, providing computers, books and other curricular materials to the local grammar school on San Cristobal island named after her father, Alejandro Alvear, former military governor of the island.

She incorporated a private foundation to raise funds and pursue other support for the two issues that most concern her there: education and journalism.

She set up the foundation in Ecuador and is in the process of establishing a non-profit in the u.s. to raise funds and pursue other support. For now Alvear provides the funds to bring the three instructors to galapagos for this pilot journalism training program. She had the moral backing of the NAHJ (Alvear, Lewis and I are all NAHJ members and the NAHJ "Manual de Estilo' was one of the critical texts used in the workshop). In addition, the Austin Forum of the Knight Foundation for Journalism in the Americas at the University of Texas at Austin also provided support.

The ‘Colegio de Periodistas de Galápagos’ (CPG) is the local sponsor of the workshop. It was founded in 2002 by 15 people working as journalists or in related professions, to reinforce professional standards and improve their skills. The group was first led by El Colono’s Ramos, until the leadership passed recently to Carlos Macias, free-lance journalist and press liaison for the Instituto Nacional de Galapagos (INGALA).

“Colegio” in this context is not an academic institution, but is a term referring a professional association. Larousse Dictionary notes “…the first meaning is of course an institution devoted to secondary education, i.e. high school; but it is also ‘a professional organization devoted to establishing rules for the proper conduct of the professionals who belong to it and to defend the professional interests of its members. So when we talk about the “Colegio de Prioodistas de Galapagos”, that is what we mean.

INGALA's Macias has worked diligently to raise the level of public respect for their profession, to more clearly understand their legal obligations, and to look for candidates to fill the few journalism related jobs in the area. The spanish environmental organization "ARAUCARIA" contributed the funds necessary to bring the workshop participants from Santa Cruz and Isabela islands to San Cristobal and provide them with room and board while attending the workshop. INGALA provided a conference room.

Under Macias, the CPG hopes to mount up to a half dozen of these workshops per year for the nascent journalism community in various parts of the islands. 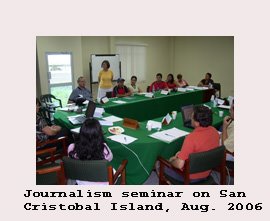 Gina Andrade, owner of Radio Encantada (also a long time talk show host on the station) which is heard on San cristobal and Santa Cruz islands attended the two day workshop. She said that she had watched the islands change over the past twenty years she has been on the air. She felt it was important that people outside the islands be made aware of what islanders were facing, and felt the local journalists in the Galapagos could play an important role in getting the message out.
The intensive training sessions were held at the offices of INGALA, just outside Puerto Baquerizo Moreno on San Cristobal Island. Students were put through their paces discussing a range of issues affecting them:

Credibility: without a deep and solid tradition of challenging, balanced reporting, the student journalists began to equate balanced coverage with their own credibility. It also helped them put public information officers in the proper perspective. They are not adversaries, of course, but they do come to news stories with an agenda that may be quite different than that of the journalist. The attendees learned that they can benefit each other and at the same time keep their journalistic ethics intact.

New Technologies: while journalists in the Galapagos certainly have access to technology to help them report, their available equipment is often outdated and obsolete. The workshop gave them the opportunity to try their hands at equipment that is in use today in the U.S.; equipment which is not particularly expensive to purchase or maintain.

Self-Sufficiency: An age-old problem here has been that 'it's not really news untiil it's picked up on the mainland.' In other words, it takes the certification of the nation's big news organizations to bring important Galapagos stories to the attention of the public. It is hoped that by pooling their efforts and developing new and novel channels of communication, local journalists will have a greater say in getting their stories on the 'national radar.'

Collaboration: considerable time was spent brain-storming ways in which the journalists could help each other, and how their allies and colleagues in the U.S. could provide vital support for their efforts. This has already lead to the formation of an email list serve, making it possible for everyone on the list, both in the Galapagos and in the U.S. to share stories, leads, events, and news that is important to the effort of improving journalism in the Galapagos.

"Lonsome George", the bachelor Galapagos Turtle on Santa Cruz island has a century headstart on the 'Colegio' and although he is still thriving, he hasn't seemed very interested in passing his genes on. The journalists of the Colegio hope they will be more successful at growing their profession in these brilliant, enigmatic islands. If their skills grow as fast as technology, evolution may finally be on their side.
Posted by Jon Beaupre at 11:19 AM